skip to main | skip to sidebar

Presenting the first of a few animated songs the Wubbzy songwriters have created for this current season of Sesame Street!  This one is about being quiet or loud at the right and wrong times....! 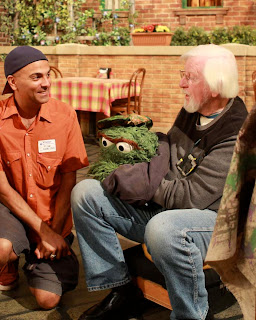 b. Mossman chats to Caroll Spinney & Oscar on the Sesame Street set.
Along with Oscar, Spinney is also the voice of Big Bird.

The Wubbzy songwriters recently had the delightful opportunity to visit the Sesame Street studios and meet cast, crew and production folks.

After creating popular animated songs for the show such as The Letter Y and The Number 20, it was great to tour the actual set, studios and offices and meet so many talented individuals in person.

There will be 4 more animated songs from the Wubbzy song crew airing on Sesame Street this season so stay tuned as they'll be posted here on the blog as soon as they're aired!
Posted by Klogz at 2:16 AM No comments:

A unique version of the theme song!

These two fans (and their dog!) are spirited INDEED! Beware of flying plastics!